For the past week I've been telling myself his birthday is on Thursday.  I even told two other people.
Only, it's not on Thursday.
It's tomorrow.
Maybe I got confused because by yesterday I thought it was already Tuesday. As a friend of mine said, "It's Monday and it's already the longest week of my life!!"

Please, someone out there, reassure me that the extent of one's children's cries does not necessarily indicate poor mothering. And that after the third time one's son deliberately "waters" the floor with his milk, juice, or water then it's okay to cry over spilled milk or juice or water.  And that when your son insists on messing with the gas stove controls a little corporal punishment is worth it, even if he cries even more than he was already doing (except of course when he was playing with the oven controls).
And that when your kid has a fever and you give him any form of fever reducer and he feels so great he thinks he can fly (literally) then it's okay to not want to give him any form of fever reducer ever again... even when his fever spikes at 105.
Don't worry, people.
I caved and gave him Tylenol when he said his head hurt.

Today was a rough day.
A storm is brewing and it always cools off just before a storm here.
So as Greg drives off to work for the night I sit alone on the back steps, tossing up a little "a little help here?!?" prayer and letting the breeze cool my skin.
I remember this rainbow I'd only been able to see from that same spot in the backyard. The rainbow formed an arc in the sky parallel to the earth.  I'd never seen a rainbow like that.  I said, "Look Ray!  A smiley face rainbow! Who put that beautiful rainbow there?"
He said , "Jesus!" Then he turned around and said, "Look Mommy! Now it's a frowny rainbow!" 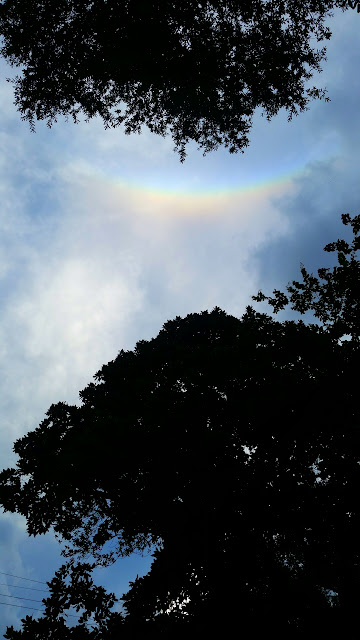 Then I remember back to when he was born and we took him home for a day only to have to bring him to the NICU for 5 days and he was still jaundice for 3 more months and how we were so stressed.
And then I remember a friend of mine, a beautiful young mother who left this world a little more than 4 years ago. I see her embracing her children and her long curly hair and her enormous, gorgeous smile. Her arms were never ever too full for a hug.

Then I remember: it's not about the what; it's about the how.

The what is all the craziness happening right now.
The how is how I respond.
The how should always be with love, no matter the what.

PS. okay, one more vent, I promise... for today... I discovered two piles of cat poop on the back porch. That's where we do our laundry. I am grateful it was not in or on the laundry.
A rainbow's a rainbow, right?

And I wrote that just so I could add the "poop" label to this post. It's my favorite.