We decided not to tell Ray what was going to happen until the night before.  We also let him know that he had a big surprise present waiting for him afterwards.

How do you explain to your son, with his cheek still puffed up from gnawing on it while it was numb, that he's getting that same procedure done on the other side. Oh yeah, and getting his front four teeth pulled as well? 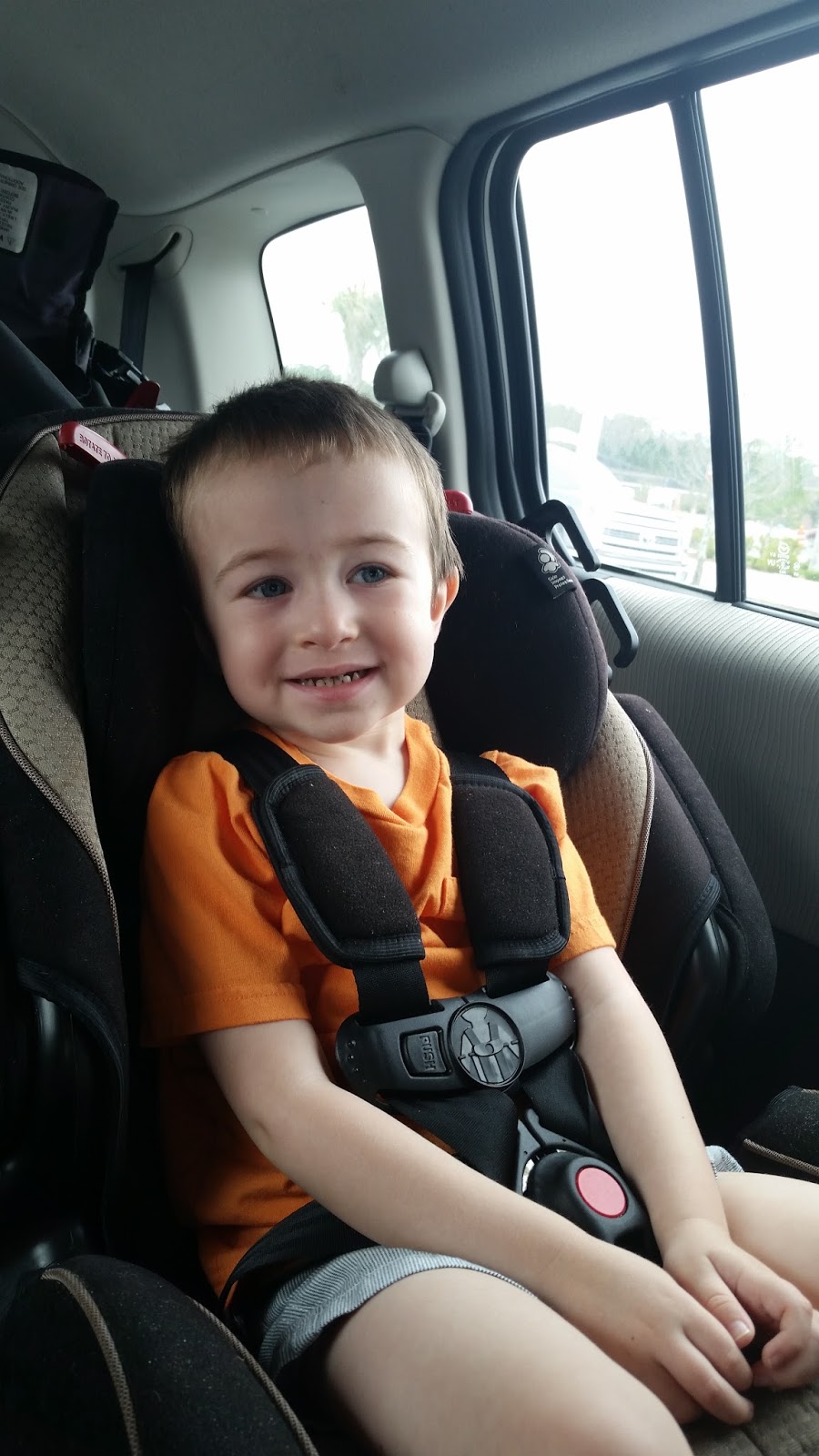 The next morning Ray was all smiles.  I couldn't get him to eat. He ate two goldfish in the car and drank 4 oz of milk.  He saw the big present bag in the car and skipped into the office.  He laid in the chair and waited while the nurse showed him all the gadgets and materials they would be using. He picked his movie and laughing gas flavor and numbing medicine flavor and acted like a pro.  I took Jimmy out for a while. 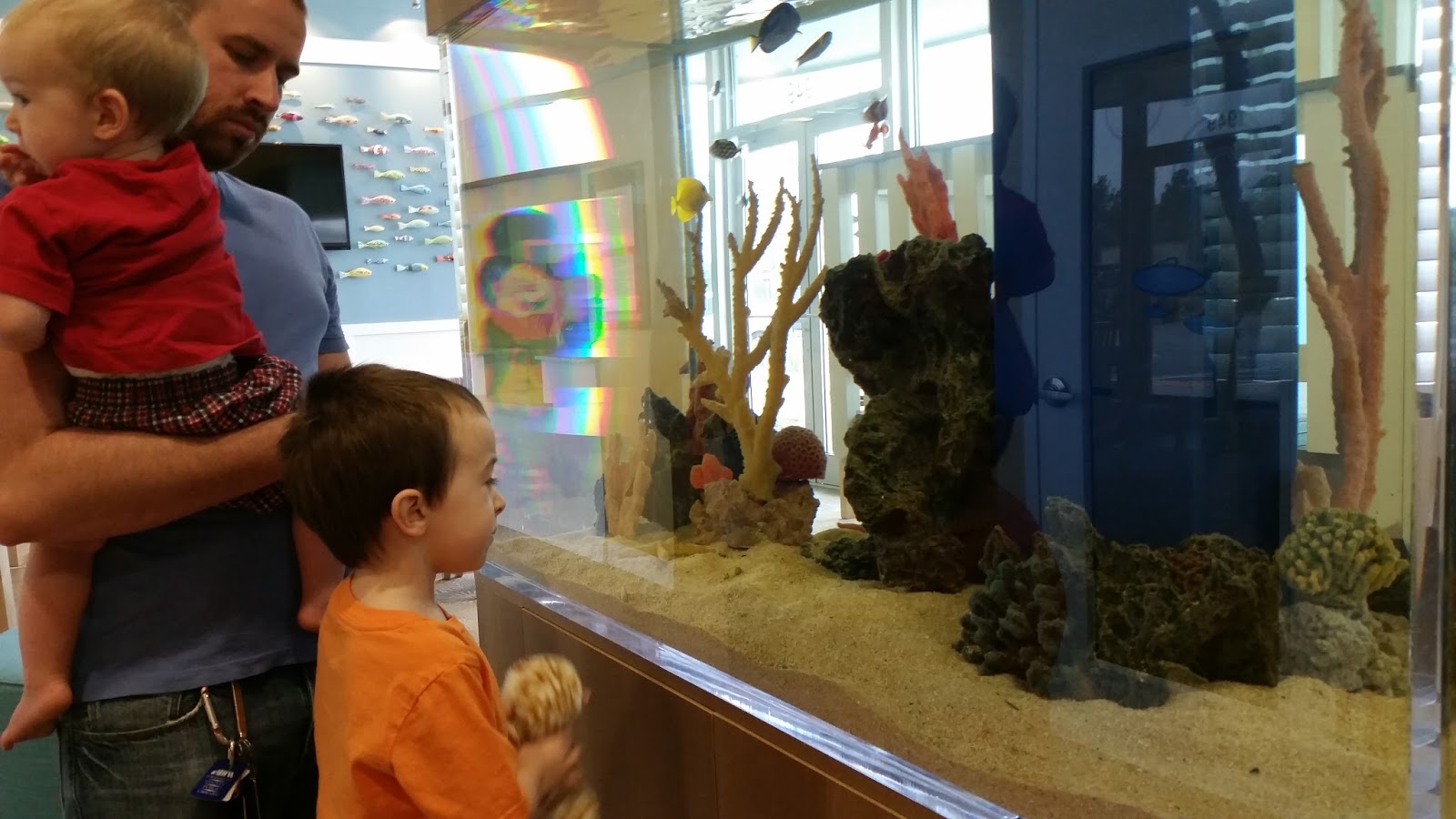 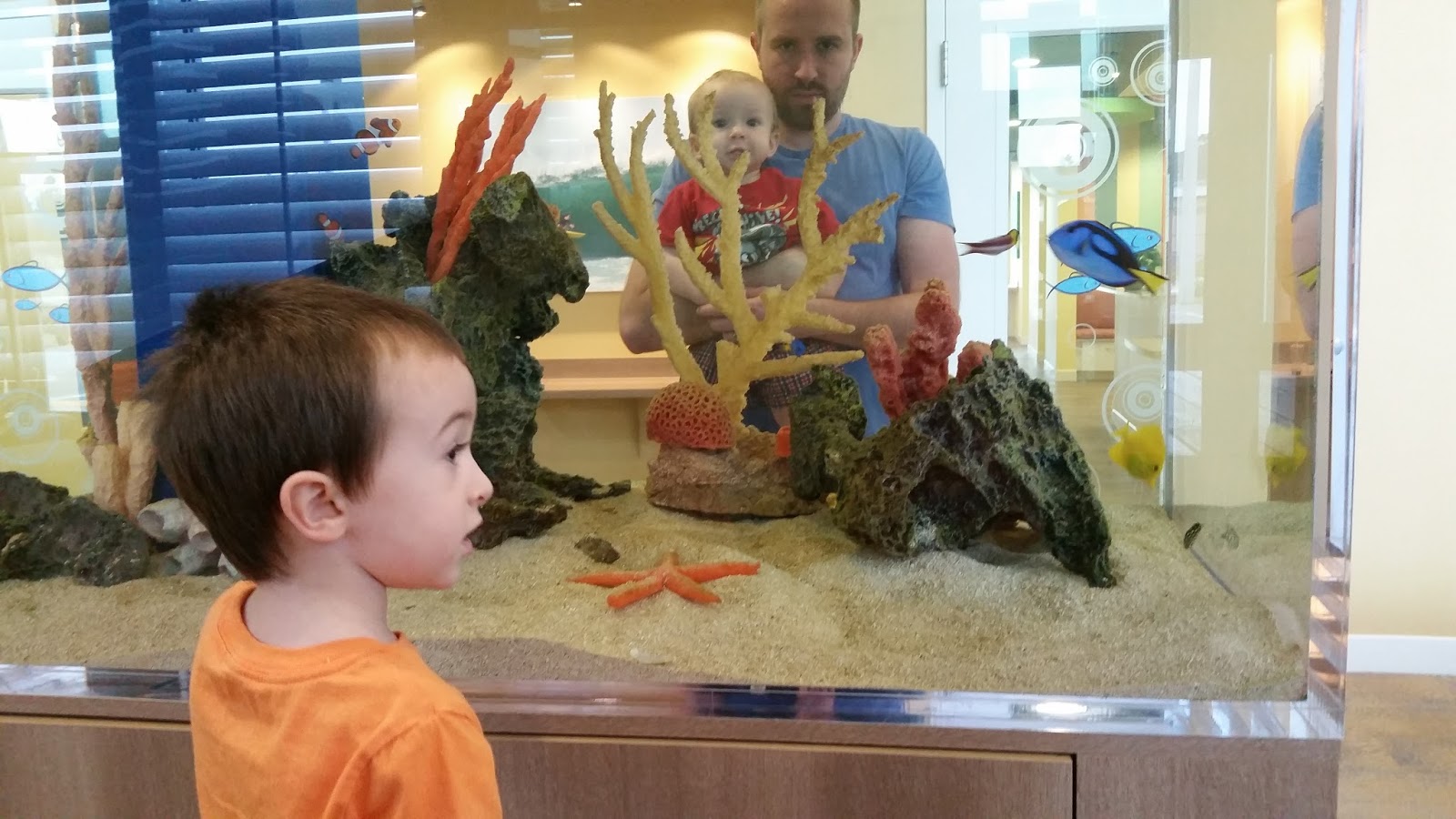 this picture cracks me up

Ray didn't scream until the numbing shots. And boy did he scream. I've never heard him scream like that. I went back and waited outside until the dentist left the room. Greg took Jimmy and I kneeled down next to Ray and whispered in his ear and rubbed his legs.  I told him everyone was praying for him, all his aunts and uncles and grandparents... Abigail, Bitsey, Peter, Catherine, Teresa, Grandma and Grandpa, Mom and PopPop, Anna and Michael (to name a few). By the time I'd gotten through the names he'd calmed down to a whimper. Then I told him what his surprise was and he quieted down even more. I sat with him, rubbing his legs, he zoned out watching the movie, and complained of being hungry (not my fault....grrrrrrrr).

Greg swapped places with me once the dentist came back. I left with Jimmy.  The next time I saw Ray everything was done, he was crying and his mouth was bleeding.  I carried him to the car, he sobbed, "Bye fishies," as we walked out the door.  Then he got to open his present: Captain Barnacles and a water-friendly Gup A ship, complete with hooks and nets and a little red fishy... an Octonaut lover's dream.

He held it for maybe eight minutes before he fell asleep.  Greg updated me on what happened. He said that at first Ray did great, holding still while the dentist filed down his tooth and placed a thin film over it.  When she went to put the "pirate tooth" on she had to use some force and that's when he started crying, and he didn't stop.  She asked Greg if he wanted to take a break before the extractions.  Greg said, "It's going to be quick, right? Let's just do it." He said the extractions took about two minutes.  He said Ray cried the loudest with the last tooth and he wasn't sure if Ray was just done with it all, or if he actually felt something. 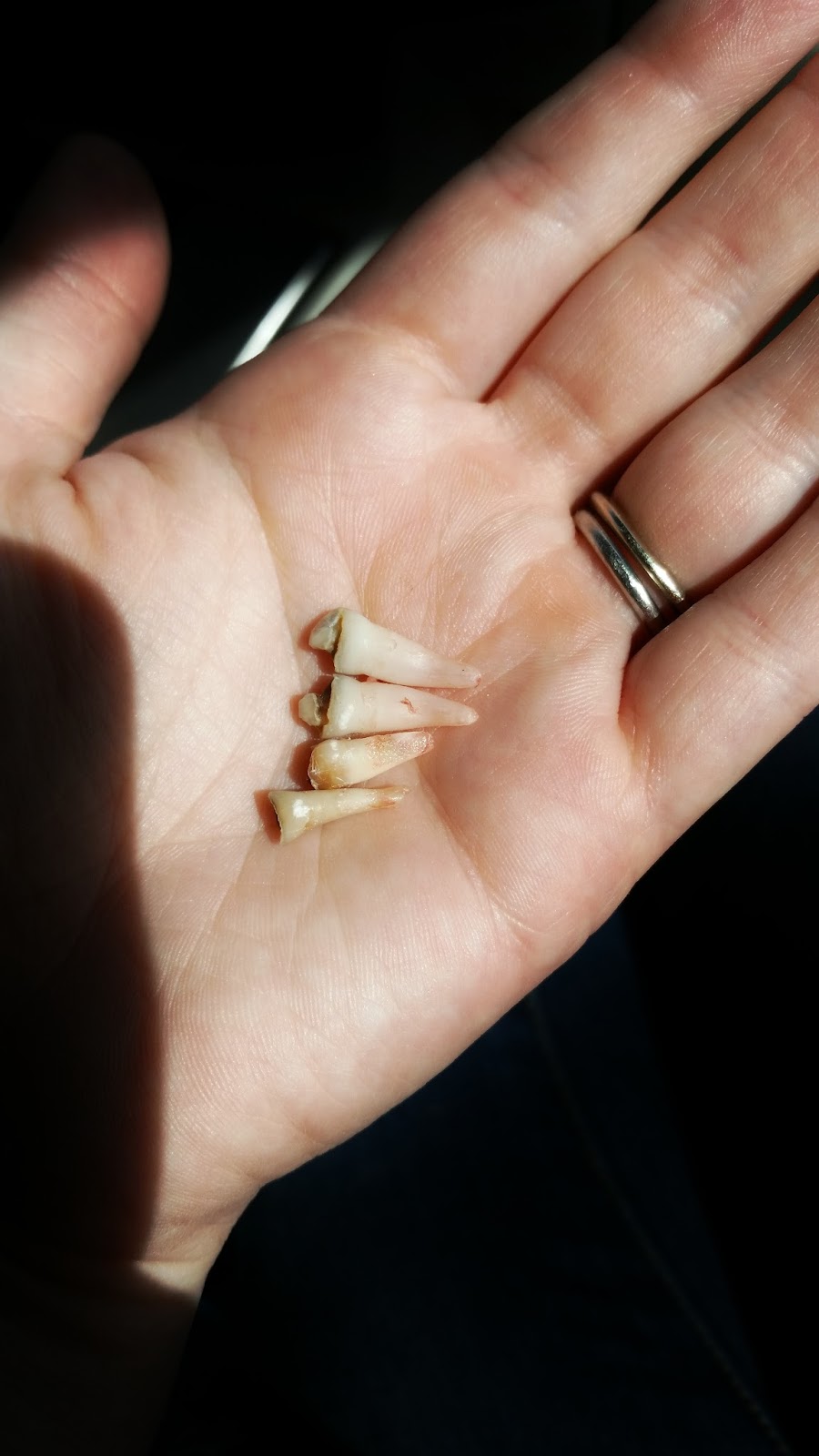 goriest shot of the blog... so far

It's done. Again, no pulpotomy needed (it's like a baby root canal).
Ray napping in the car was the best thing that could have happened.
He woke up to popsicles and fudgesicles and a little bed of the couch and the tv playing the Octonauts. In no time he was wired. He ran circles around the living room for the rest of the day.
No swelling. No tears.
I asked him to show me his pirate tooth.  He said "Look, Mommy, I have two pirate teeth!" 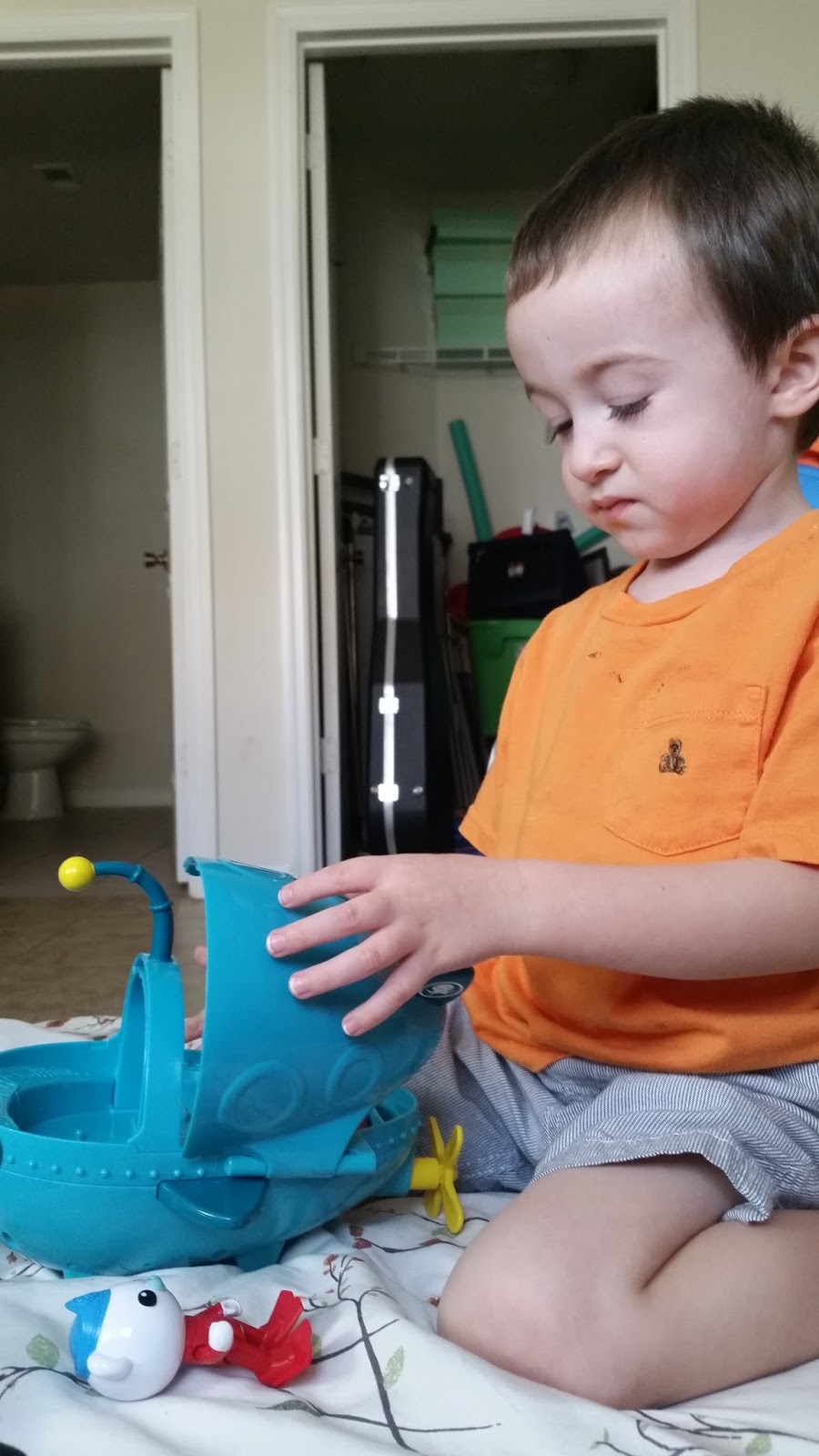 playing with his well-earned present

Thank you for all of your thoughts and prayers.  Sorry for the delayed post.  We've had family visiting... more on that later!