We attended Easter Vigil Mass, like the optimistic idiots that we are, geared with a backpack full of glow sticks and goldfish snacks and jungle animals (toys, not the kids).  We discussed on the way, "The vigil mass is awesome: no lights, open flames, lots of singing, loads of people... the kids will love it." 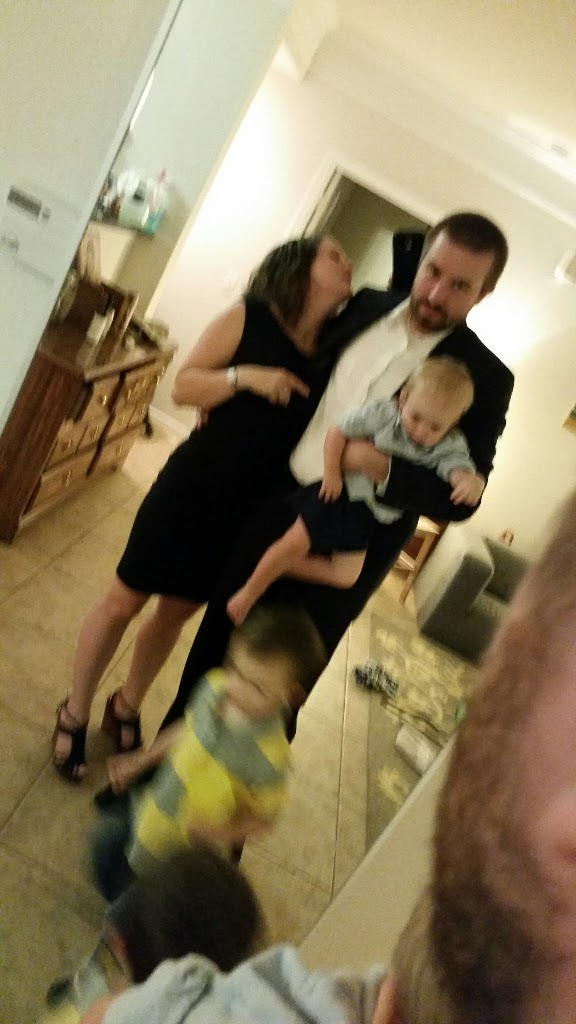 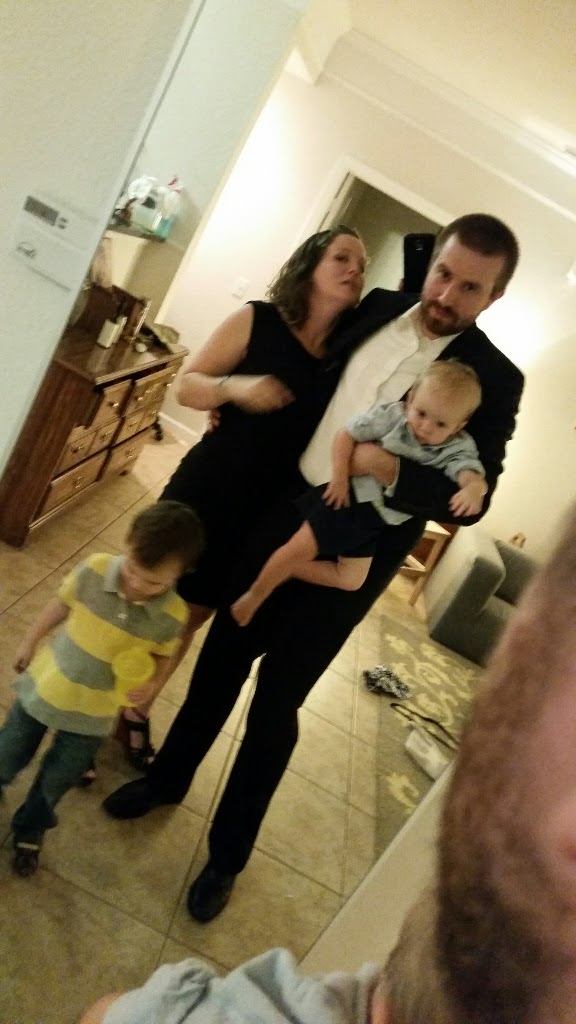 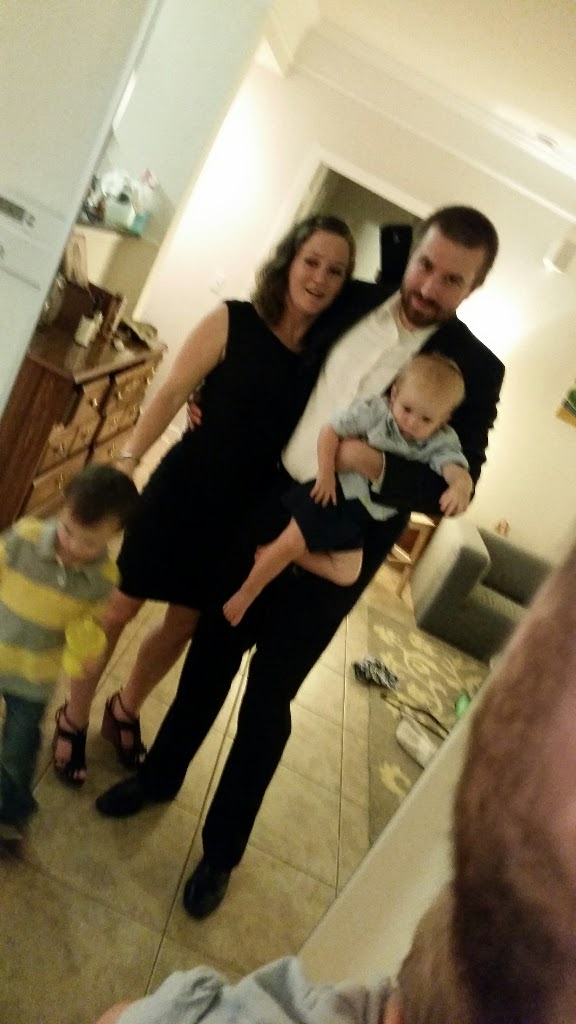 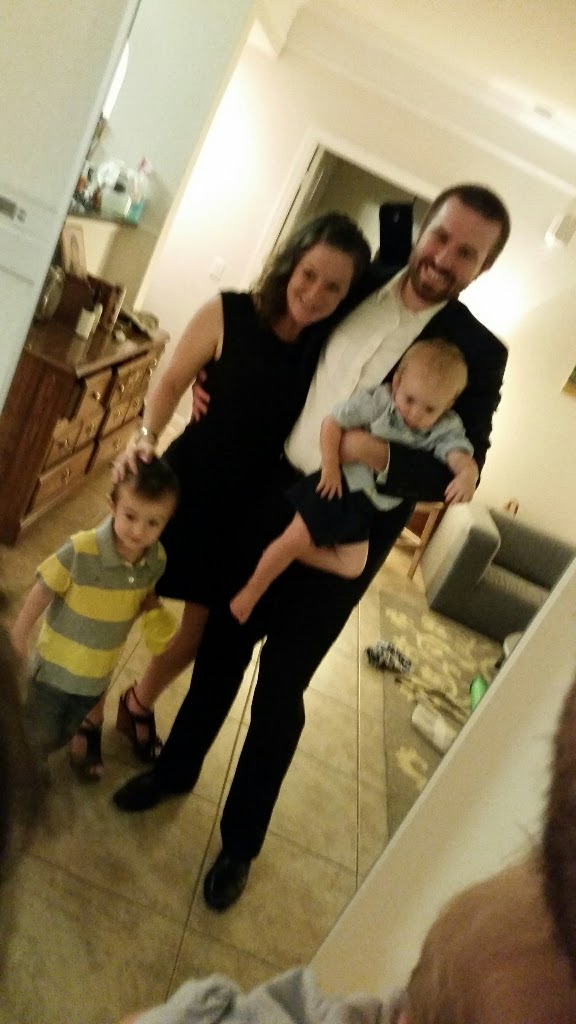 our first attempts at an Easter family picture
Greg even had a gameplan, "I'm going to take the kids to the beach and to the market.  We'll come home and they'll get a bath and eat dinner.  They'll be worn out for mass." He was gone for 5 whole hours with BOTH boys.
Sidenote - During that time I cleaned the entire house and cooked dinner.  It's astonishing the amount of work you can do when you're all alone.
Jimmy fell asleep on the way in the car. Mass began at 8:30pm. We got our candles lit and marched into the dark church, along with the rest of the small number of vigil attendants... only one of whom had a child, a tiny baby.
Then they turned on the lights right after we came in. Ray got to wave a candle around hold a candle for a while since the glowsticks-as-nifty-distraction were now useless.
Then Jimmy woke up before the readings even began, just in time to see Ray with the candle, getting to blow it out, and Daddy putting it away. As we all sat down to hear the readings, Jimmy went straight for the candle and Greg took it away and Jimmy screamed... ssssscccrrrrrreeeeeeeaaaaaaammmmed. 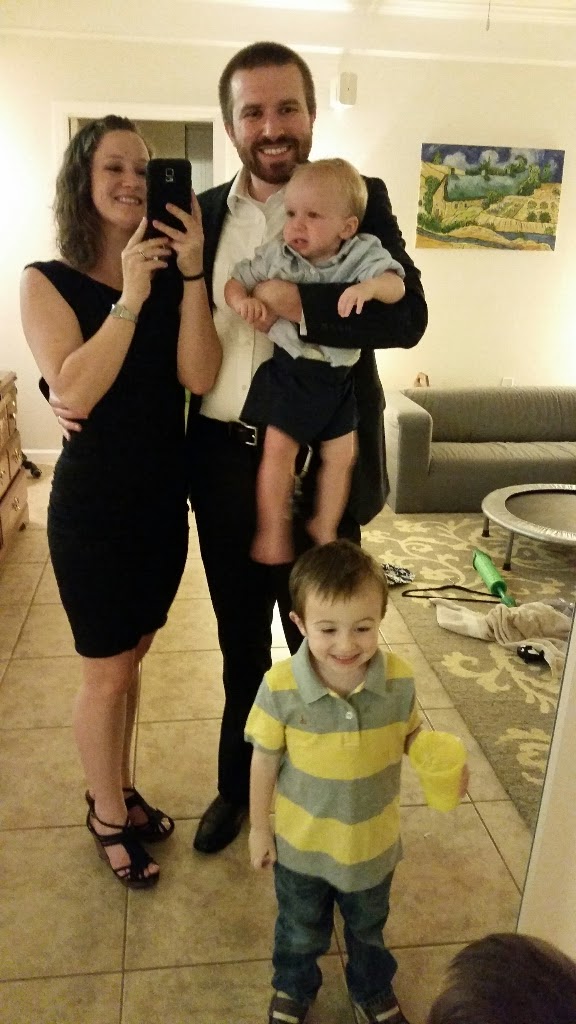 we decided to let someone at Church take them.
"I'm going to take them for a walk," Greg whispered.
And that was the last I heard from him for a while.
I went to make sure they were still alive somewhere between the 4th and 5th readings.
They were outside.  We traded places.
I brought the backpack and Jimmy got a hold of the glowstick pack, spilling them everywhere. Ray helped me pick them up, "Here Mommy, I'll crack them!" and then I blinked and every glowstick we owned was lit. 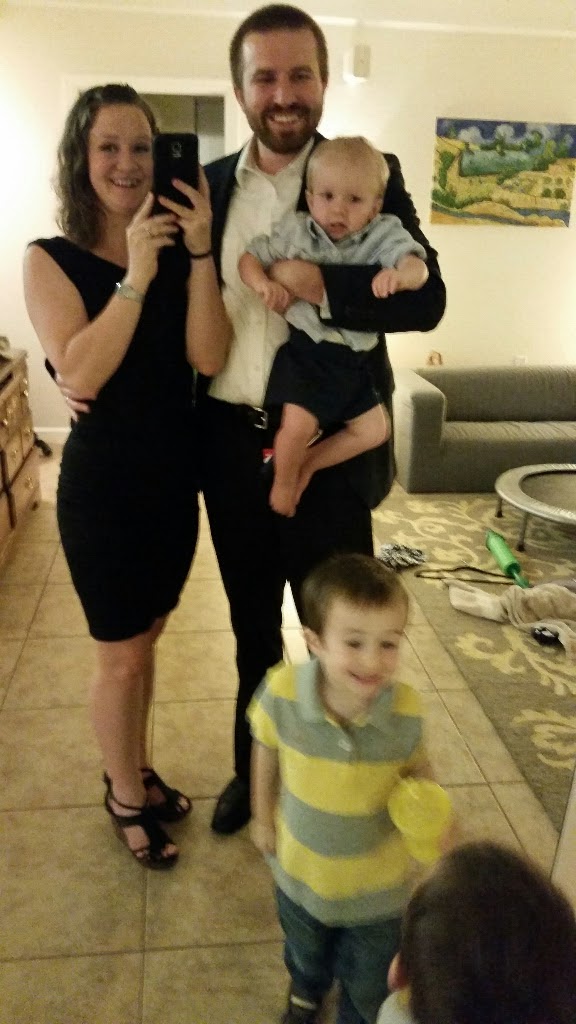 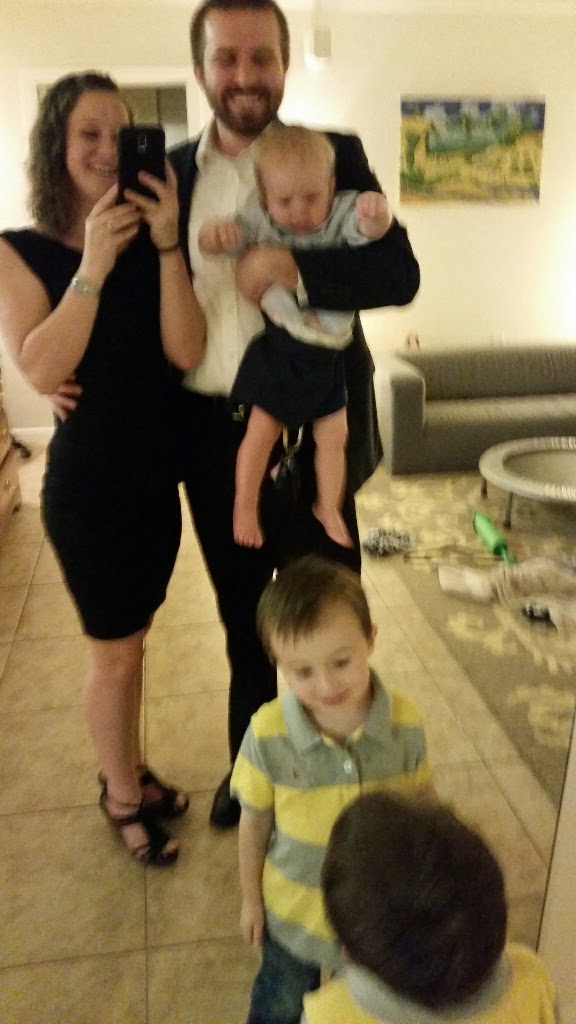 which never happened.
Anyway. Ray fell asleep 20 minuted before Mass ended. Jimmy decided he wanted to play quietly in the pew by himself 5 minutes before mass ended.
It was 11:30 when we pulled out of the church parking lot.

After tucking the kids in their beds, sharing an entire jar of Talenti ice cream, and eating a few Reese's eggs, we declared the night an overall success and vowed to do it again next year. 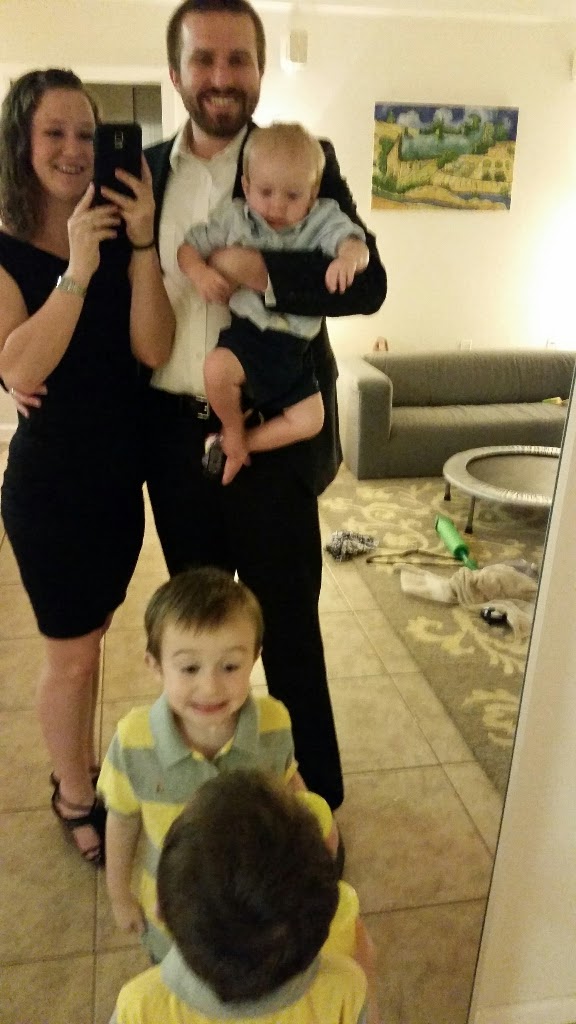 so here you go.
The next morning the Easter Bunny brought way too much sugar... Peeps and all. Ray found all the plastic candy-filled eggs hidden in the house. We trooped outside to search for our dyed eggs.  Ray found a bunch. Jimmy found one, picked it up and threw it on the sidewalk. Picked it up. Threw it. And did it again, until the blue shell was littered everywhere. Greg grabbed it before the entire egg was smeared into the concrete. Good save, Daddy.
Later Jimmy repeated his Easter egg demolition inside the house when we weren't looking. I noticed just as the egg smearing shifted from the tile floor to the wool rug.
Good save, Mommy.
We ate way too much candy. Greg made amazing sausage and gravy that helped keep the family from turning into sugar-zombies. I took a three hour nap. Greg took a power nap. We felt like crap and swore we would never ever eat any sugar ever again.
Greg took the boys outside while I cooked. 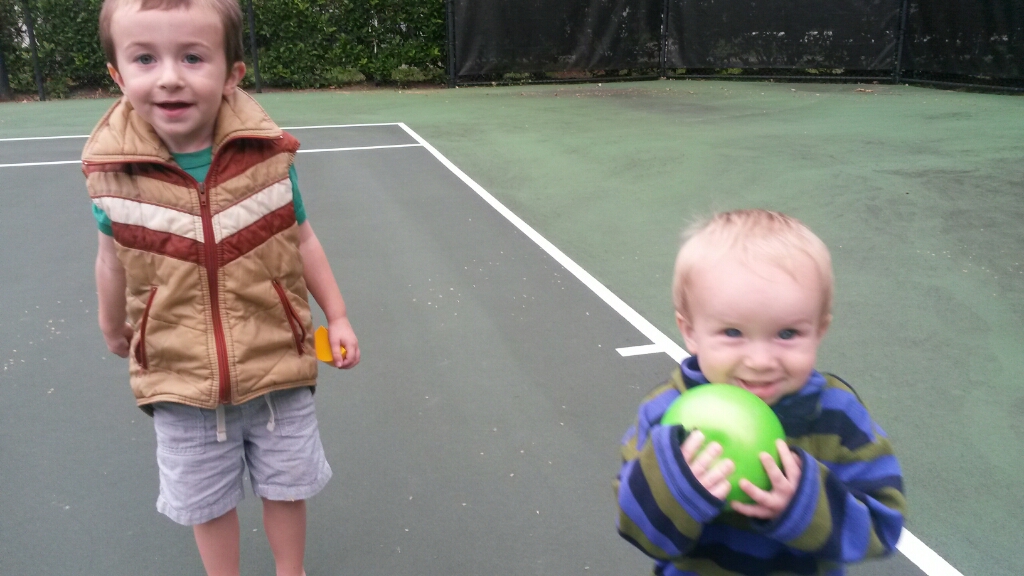 did you know there's a tennis court here? I didn't.
Easter dinner consisted of lamb, roasted garlic and onion mashed potatoes with lamb gravy, and asparagus.
Then we ate more of our Chocolate Easter bunnies.

Since beginning this post Jimmy has taught himself to remove his own diaper. So, I'm off to finish my chocolate bunny remains...

PS- I'll try to add more pics later after I get a hold of Greg's phone... try checking back tonight or tomorrow.